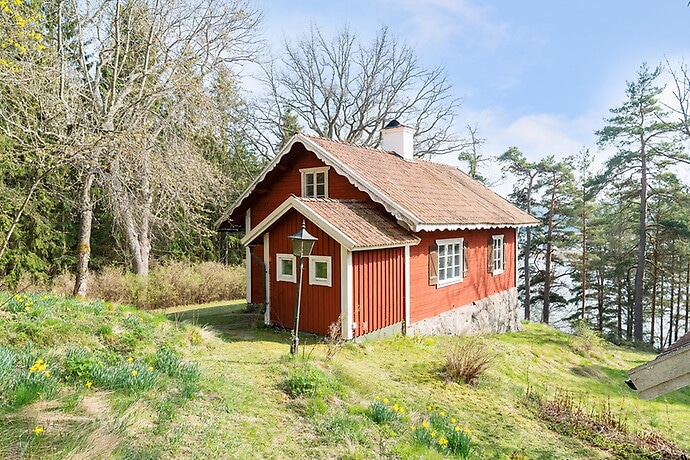 This is the one…

The first time one of us voices this thought we are driving on winding dirt roads in the middle of Southern Sweden. Lakes and forests everywhere, with picturesque red farm houses scattered around a hilly landscape. Even before reaching the house it feels like we kind of belong here…

The house itself is typically Swedish: red wood, with a small porch and two levels. It is maintained in a traditional style, most of the original elements are still there and the current owners put in furniture in similar, tasteful design. Directly next to the house is another building that was built as a school in the 19th century. There is not much left of that spirit, but you can feel the potential creating a creative workshop space.

As we roam around, an undefined feeling starts to grow being locked-up between the trees. Where is the wide view we were initially looking for? And the waterfront? Have we been spoiled by our first Home Exchange a few days earlier when we stayed in a small boat house at one of ‘the thousands lakes of Sweden’?

We leave with more questions than answers and we soon come to agree that is okay. Acknowledging that quite quickly opens us room for conversation about the underlying interests of our questions and concerns. And on we go.

The second time one of use dares to say ‘this might be the one’ we drive along the East coast of Sweden, on our way we pass ‘Astrid Lindgren’s World’. It is not so much the childhood memory of her books that is enchanting us, but the winding dirt roads, the beautiful trees and the play of water with a view.

We had almost discarded the property on our estate-list at Hemnet (the Swedish market place for houses). Too small, the view seemed a bit ugly and no direct access to water.

The opposite is true. Okay, the house is a bit small, but there is room for expansion. The view is mesmerising, why did the photographer take it from this angle? Ascending through a tiny forest that is adjacent to the water, which is protected by Swedish law so no-one can do anything else but jump in and swim there.

To conclude, questions are okay, assumptions not, at least not too many before we actually see, smell and hear a place. The questions bring us forward, not so much the answers. And yes, we allow ourselves to hope this is the one…