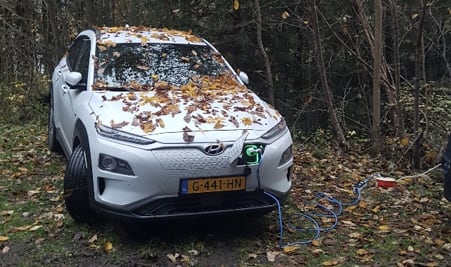 How electric driving helps you unwind

From Rotterdam to Her Berg is 1300 km. Chris made this journey all-electric!

Everything upside down. The end of a relationship. No more shared holiday trips. So I might as well loose myself in my job and my to-do lists.

But everybody needs a break from time to time. So when I scrolled past Anne’s email regarding the creation of Her Berg, the penny dropped; that could prove to be a good excuse for a holiday. Away from home, away from my job and with a clear goal in sight.

I got an enthusiastic response and after getting to know the others during a brainstorming session, the decision quickly became final. In the beginning of October I would travel to Sweden to spent two weeks insulating a roof. With a slight additional challenge: at the end of September I would receive my new lease car, a full electric one. And Rotterdam to Her Berg is 1300 km. That would be quite a journey with a car that can travel 350 km on a full charge and has to spent 11 hours on a conventional charging point to recharge.

After some research on the internet, a break in the long journey was found: the ferry from Kiel to Gothenburg. I would get on the boat at six in the evening and arrive the next morning, a few hundred kilometers closer to my destination and, not unimportant, with 9 hours of comfortable sleep. The rest of the trip would be split up into a 600 km and 350 km stretch. Still too far to reach on a single charge, so charging along the route would still be necessary. Fortunately electric cars often have the option of fast charging or ‘supercharging’. While it is a bit more expensive, it is the best option to travel further than a single charge can take you.

Allow me to dive into some technical details: With petrol or diesel cars, we are used to expressing the fuel economy of a car in the number of liters of gas it uses, on average, per 100 kilometer. The capacity of the fuel tank is expressed in liters and the combination gives you the range of the car. The speed at which you can fill the tank is never calculated, because it is always done within a few minutes and therefore not interesting to mention. This is different for an electric car. Charging or ‘filling the tank’ takes much longer and therefor has to be taken into account. The before mentioned terms are slightly different for an electric car. Fuel economy is expressed in kilowatt-hours (kWh) per 100 kilometers. Simply put, a kilowatt hour means using 1 kilowatt (kW) of power for an hour. The capacity of the battery pack (the fuel tank) is expressed in kWh. The speed with which you can fill this “fuel tank” suddenly is a lot slower. This can easily take several hours.

So it was time to do the math: Driving an electric car for longer distances is about the balance between rate at which you are consuming power from the battery pack during driving and the rate at which you can charge the battery pack when supercharging during breaks. During the trip the average power used by my car was 18 kW. So after an hour of driving I had used 18 kWh. During that hour I had driven approximately 100 km. So, after 2.5 hours I had used 45 kWh (18 * 2.5) and driven 250 kilometers. My car could supercharging with a capacity of 45 kW, so after an hour of fast charging, 45 kWh was charged back into the battery. In short, this meant that after 2.5 hours of driving I had to take a 1 hour break.

All well and good, but that meant that I needed a fast charging station every 250 km. And unfortunately supercharging stations are not as densely scattered across the European landscape as petrol stations and most of them are not indicated on road signs. Luckily there already are several apps that collect all the information about the charging points that exist in Europe. I took a look at the locations of the charging stations beforehand, but on the road it worked really well to just find the next charging station on route on the go and add it as a waypoint in the navigation.

Refueling during a route trip then becomes a completely different experience. With my previous car, a diesel station wagon, I was used to turning back onto highway after just five minutes of refueling and driving for hundreds of kilometers again. With the electric car refueling became a “mandatory” long break. Park the car, connect the cable, activate the charging station and wait. Time to go to the toilet, get a cup of coffee and some lunch and then watch some Netflix in the car. And ‘keeping the engine running’ during the break for the warmth doesn’t have to leave you with environmental embarrassment. No parts are unnecessarily moving and using fuel in an electric car when it’s parked. Only the radio and heating system use a little bit of power. So, with the mandatory long break, I was able to start the next piece fully rested.

Conclusion; after 2 days, I travelled 1300 kilometers and arrived in the middle of the forests on the east coast of Sweden. People were already busy and I couldn’t wait to get started. And, due to the nature of my travel, I had all the energy for it. I think I was geared up and on the roof within the first five minutes. 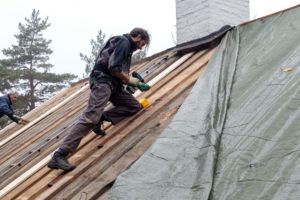